Increased independence and participation at group home with welfare technology

Abilia has participated in a collaborative project to test and evaluate the effect of usage of enabling technology (in the shape of a digital planning calendar) within a group living environment. Kaggeledsbacken is a residential care setting where the residents are hearing impaired and communicate using sign language. The residents have also other disabilities of various kinds, often cognitive disabilities which can make processing, interpreting and conveying information more challenging. 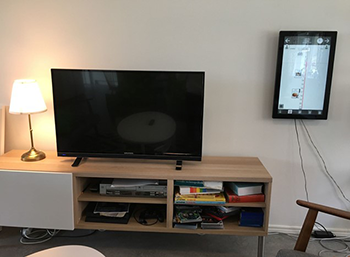 The residents need different kinds of support and help, such as structure and planning for daily life. The purpose with the project was, above all, to ease the communication with residents, to increase their participation in both their living environment and in the society, to increase structure in everyday life, and to give a feeling of both context and independence.

Darko Torres, operations manager at the Kaggeledsbacken setting, was the one who initiated the project. It was implemented within the framework of AllAgeHub’s operation, an organization that works to help research, development, and innovation of enabling technology to become more accessible in residential settings. The aim is for people to live more independent and safe lives, no matter their disability or age. AllAgeHub is a platform for collaboration between 13 municipalities in the Gothenburg region, Vinnova (Sweden’s innovation agency), Region Västra Götaland (health care organization in western part of Sweden), the civil society, the academic world, and the business world. Kaggeledsbacken chose Abilia as a partner in this project due to our knowledge on cognitive challenges and our digital planning calendar MEMOplanner.

Lena Schön, Key Account Manager at Abilia, says about Abilia’s role: “As a first step we listened to what Kaggeledsbacken wanted and their needs, and then we found a suitable solution together. We placed a MEMOplanner in the common area in the group home where it was accessible for both the residents and the staff to use. MEMOplanner is a digital time and planning aid that visualize days, weeks, time, and activities and makes it clear for the user. We also assisted Kaggeledsbacken with education and support to the staff. MEMOplanner is a great tool for planning, creating structure and for clarity.”

It didn’t take long before the behaviour pattern changed. The MEMOplanner became a central point for the residents to search for information. In a clear way, with both pictures and text, the residents find information about common activities, such as when it’s time to play games in the garden or to bake a cake, and what is served for dinner. The residents could easily book themselves in for activities and communicate if they would like to join others for dinner. But the usage also contributed to increased engagement among the residents during the house meetings hosted by the staff. At these meetings they planned upcoming activities and what food to cook.

By the end of the project, it was concluded that placing a MEMOplanner in the common area had a positive effect within the following four areas: increased participation and influence among the residents, increased safety and independence through a more clear structure and involvement among the residents regarding planning of activities, improved attendance to more activities, and not least – communication was enhanced.

Carolina Fornell, project manager at AllAgeHub, says: “We bring with us many positive learnings from the good cooperation with Abilia and Kaggeledsbacken. It was really useful to be able to test solutions while having a tight dialogue with the supplier. This contributes both to gain deeper knowledge about the product and experiences about what changes are required to implement a solution in best possible way.”

Lena Schön again: ” We are very happy and proud over the effect that was noticeable at Kaggeledsbacken. Me personally, I think it is great to be able to contribute to increased usage of welfare technology. This is what we want to achieve at Abilia – to make it possible for people with disabilities of different kind to have access to aids that makes it easier to live a independent life and be a part of the society.”